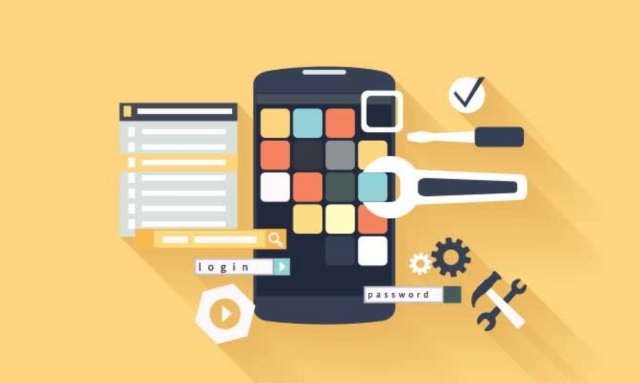 Do you know more than 90% of screen time is spent on mobile phones using apps? On average people have around 80 applications on their smartphones. They look at apps for solutions to their every problem. Such popularity and dependence on mobile applications have bridged the gap between the targeted audiences and enterprises.

From searching to deploying and maintaining an app, different types of tools and technologies are required. Thousands of apps are released daily and more than half of the apps are never downloaded on the Google play store. I know you want this to happen with your app. For this, selecting the right tools is crucial.

The below image shows the number of downloads of mobile apps in billions worldwide from 2016 to 2021.

What Is the Mobile App Development Tool?

A tool contains in-built functionalities and components. You just have to drag and drop to build an application. Along with this, you will not have to write code individually for different platforms.

With the help of a cross-platform tool, you can build an app with a single codebase. Likewise, different tools have different purposes. So, you can hire android developers to build an app for iOS also. Scroll down and know the popular developer tools for mobile app development.

It is an integrated development environment for building Android apps. It offers several features that improve the productivity of developers dealing with a project. The flexible Graddle-based build system of Android studio makes it more effective. It renders a unified environment that is suitable for all types of Android devices.

You can build the most effective apps even faster with the help of the Buddy tool. It is an easy platform, so even complicated CI/CD workflows take a few minutes to complete. State-of-the-art caching, all-around art optimization, and Parallelism are the most useful features of the Buddy app development tool.

Xcode tool is widely used by professionals in iOS app development. It offers various debugging tools to sort out problems faster. Likewise, you can use it to manage image and code files. You will not need a different tool to develop and publish the app, since it is used for both.

You must have noticed in the image above that more than 40% of developers use Flutter. You can build interactive UI designs for multiple platforms. Moreover, the designs are responsive and robust. It works with Dart language and renders a native-like feel and performance.

React Native is a User Interface software to build beautiful designs. It is backed by Meta and has a large community of developers. This open-source framework uses a JavaScript library. Furthermore, you can build apps for multiple platforms using a single codebase. So, if you want cost-effective and intuitive designs, React Native can be a great choice.

It is also an open-source mobile app development tool. It works with technologies HTML5, CSS3, and JavaScript to build cross-platform software solutions. You can extend the application to other platforms without working on it from scratch. It offers a WebView within the native application for an effective user interface.

As the name implies these tools are used for designing mobile applications. You can give an innovative look to the app and attract more users. Since a user interface is crucial for engagement and lead conversion, most businesses focus on designs for better results. Here are some of the design tools.

From Rapid prototyping, testing, and handoff for advanced design teams Marvel has everything. You can bring your ideas to life easily with the help of this amazing tool. Beautiful mockups and wireframes built in Marvel can attract any user. In addition, the features are handy to build intuitive designs.

You may find it similar to photoshop, but it has much more than that. You can create and edit vector files, and build highly-interactive prototypes. It is suitable for mobile, desktop, macOS, and Windows as well. You can offer great experiences to your app users with the help of this versatile tool.

This is a digital design tool for macOS apps. You can create beautiful and interactive designs for desktop, mobile, web, and wearable using the Sketch tool. It is vector-based and renders scalable graphics to handle more traffic. It is the most popular UI/UX design tool that is used by most developers out there.

So, these were the popular developer tools for mobile app development. They improve productivity by offering in-built components and features for which developers don’t have to write code. Tools save effort as you can complete the app development in a short period. There are many other tools as well. If you know your requirements for app development, choosing tools becomes an easy task.